Variations include beer, wine, and hard liquors like vodka and whiskey.

Alcohol, like other depressants, slows down the central nervous system. This can lead to feelings of relaxation, confidence, and lowered inhibitions. It can also cause physical reactions like loss of coordination, memory, and the ability to make good decisions.

Alcohol is a carcinogen, increasing the risk of a variety of cancers, including the colon, liver, esophagus, throat, and mouth. Many medical professionals insist that any alcohol consumption can be harmful.

The Centers for Disease Control (CDC) says that for women specifically, having more than seven alcoholic drinks in a week puts them at higher risk for heart disease, stroke and liver disease. The recommended maximum level for men is twice that amount.

Women who have even one drink a day have a 10 percent higher risk of developing breast cancer than women who do not drink, and the risk rises another 10 percent for every extra drink they have a day, according to 2009 research from the University of Oxford.

This map from the Pew Charitable Trusts shows the prevalence of alcohol misuse: 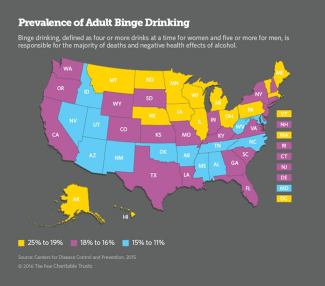 Signs someone could be misusing:

Research has shown that continued use of substances, including alcohol, can make a person more at-risk for developing addiction. So for children and teenagers, drinking can be particularly dangerous.

When an adult is misusing alcohol, they might feel they need to drink, rather than want to drink. They may find themselves drinking far more than their peers in social situations, or drinking heavily alone. Many people in recovery say that they used to frequently black out from alcohol use, finding themselves unable to remember what they said or did during the time that they were drunk. The situations can be wide-ranging, but the bottom line is this: Once alcohol is interfering with someone’s daily life, it’s misuse. 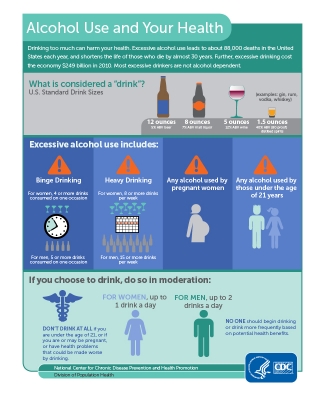 Excessive alcohol use has immediate effects that increase the risk of many harmful health conditions. These are most often the result of binge drinking. Over time, excessive alcohol use can lead to the development of chronic diseases and other serious problems.

If you or someone you love is struggling with alcohol or substance addiction, contact us today to explore your options.
Contact us
COGNITIVE THERAPY
GROUP THERAPY
REALITY THERAPY
MOTIVATIONAL ENHANCEMENT THERAPY

Recovery from
addiction implies the
development of a
lifestyle that is
conducive to societal
standards.

Recovery means accepting your addiction
as a primary disorder
and following treatment
recommendations.

You will be expected to accept feedback
about your thinking and behavior with an
open-mind.